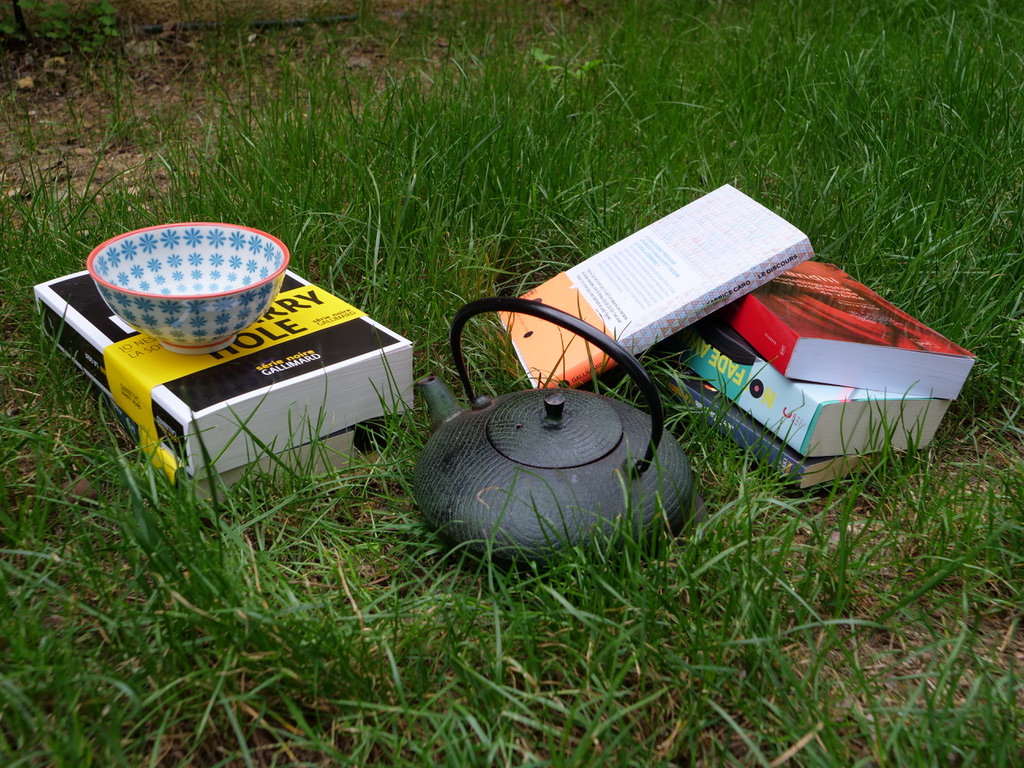 On that day, I left the office without looking back, I had swapped my working clothes for a cup of tea and books. Exchanged a social status easy to read and to understand to every people for an enigmatic and confused life project. I was leaving with a light heart towards few weeks of idleness during which my first priority was to learn to act slowly and softly. With the smile on my face I thought of the next meets that would inevitably start by asking me “what do you do? “. I was already preparing to answer with confidence “nothing! I do nothing! I read and drink tea. Sometimes even both at the same time”.

It all began with a desire to clear the house of stuff, there were far too much stuff in the house. Stuff we did not use or no longer required, useless and unused materials, objects that had become irrelevant to us. This desire had very quickly turned into a methodical extraction work of dusting. That consisted of sorting, giving, selling, stowing, cleaning, sweeping and organize. A methodical and meticulous work up to the inventory of all the books of the house. We stock some 1,053 novels, biographies, autobiographies, essays, stories, dictionaries, comics, etc. of which a little less than half, unread. In this context, it seemed perfectly clear to me that such a delay in reading was difficult to reconcile with a full-time job! This deaf observation has matured and materialized in in a forceful and imperative manner by the termination of my employment contract.

At the announcement of my change of life, the expressions and glances of my entourage were always the same, big eyes that fixed me and the complete stop of the movements, the bottom jaw which was falling, and then, after a time, a “Oh! great “, before the famous” but what are you going to do? “.

It was not easy to convince people around me that it could be an integral part of a real project of life and that I just do not go crazy.

At the same time, I did not do much effort to convince them that the passage of the woman, in couple, with two children, an interesting professional career, curious and open-mind personality, to the roles of homemaker and mother completely free of her schedule could make sense. Apparently, same is I could remain as also dynamic and curious, this did not make much sense for them. It was clear that in their eyes it was necessary to lack of clear thinking to deprive oneself to have to wake up still tired to prepare in a hurry just before consuming almost all the batteries recharged during the night to make sure that the children arrive on time at school, before to catch the metro to join the office, in order to go from meeting to meeting without having to worry about the weather, before to catch again the metro in the opposite direction in already considering the preparation of the dinner, right before passing home door to get as quickly as possible to peel some vegetables in speed with my eyes fixed on my daughter’s notebooks for help her with homework, before have a diner in a hurry because it is already late, and rush children off to bed because I know I had one or two at work before have finally a time to oneself, time that I fully used while falling asleep on the sofa before dragging a few minutes later to his bed. Here are 5 days a week, it is well punctuated, this happens in a rather concrete way and it goes pretty fast. Finally comes the weekend! Weekend which has been eagerly awaited, as if it was allowed to live only two days a week.

I wanted like something else and I wanted like also to banish any grudge against the Monday from my soul. I had everything to reinvent, it scared them and somewhere that reassured me. I was going to be able to satisfy my curiosity, going to meet the world around me and of course to have the time to read and delight my senses. Although it was nothing special, it was not ordinary, and I did not know where to start!