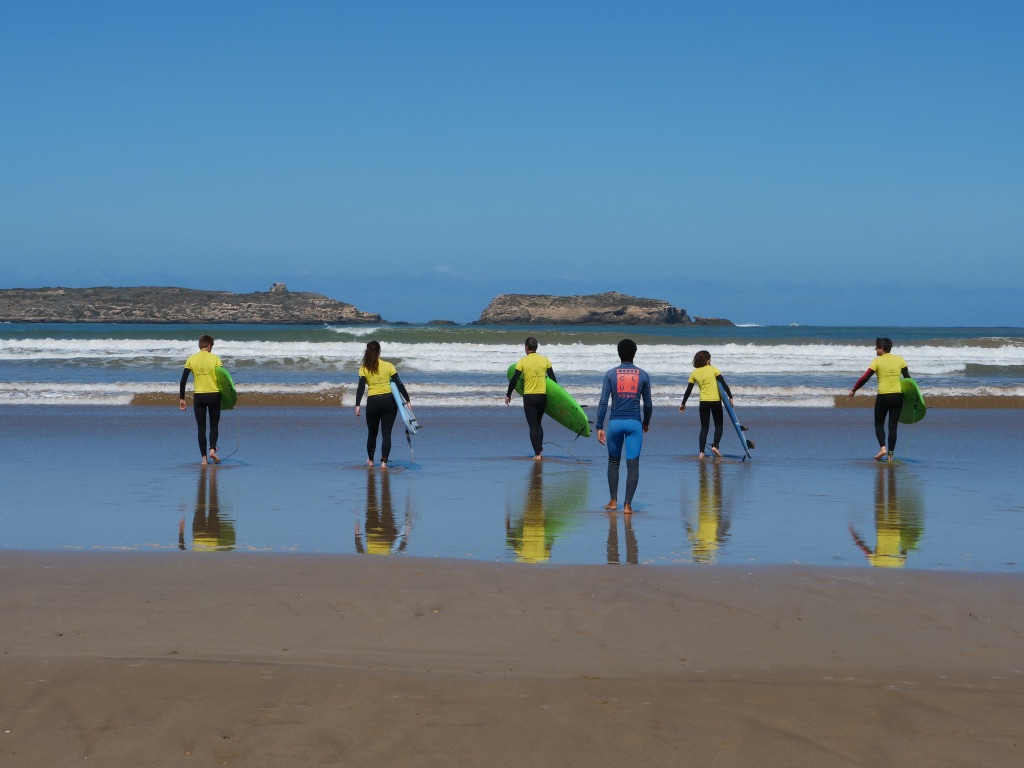 During our last family trip to Morocco, our desire to practice kitesurf leads us to Ocean Vagabon on Essaouira beach. Ocean Vagabond offers a beachfront enchanted parenthesis in which it is possible to pursue in his water sport according the winds and waves and enjoy a cuisine as casual as prepared with attention in the shade of the restaurant’s mimosas.

As Ocean Vagabond do not proposes only to practice kitesurfing but differents water sports, we wisely waited by taking surf lessons than the wind rises enough to take ours kites. Moustafa proposed to us few warm-ups and reminded the basic elements of the surf on the sandy beach of Essouira between dromedaries and horses, before getting into the water to help us to ride the waves the easier than ever! At the end of these two hours of surfing lessons, the head barely dry, we sat around a wooden table of the Ocean Vagabond restaurant terrace to discover a structure fully engaged in the sustainable development values. Because Ocean vagabond practice and uphold his credo of “become aware of the world around us and help us preserve it”. At Ocean Vagabond no plastic bottle, no plastic straw, the restaurant’s organic vegetables are just picked from its own vegetable garden located in a neighboring village, pizza dough and burgers’ breads as well as every dishes of the menu are homemade. The races are carried out using a cargo bike, the organic waste join the on-farm composting and the glass bottles are sent to a cooperative to package the argan oil. Also, every person at Ocean vagabond is connected. Completely connected with nature and natural elements.

Soon the wind has picked, and the kitesurfing has taken place. No comments about the quality of the equipment, it is really good. The first waves can be difficult to pass through for the beginners but the more confirmed will feast to use the power of the kite to catch a wave. There can be many people at the first waves for kite lessons, but the beach is sufficiently long and wide to not be on top of each other.

Ocean Vagabond is the kind of adventure we like to hear. In 1996, the windsurfer Sébastien Deflandre drives from Guinea to Essaouira after passing through Dakhla. Dakhla it is too early, the time is not right for doing something, he will come back. In the meantime, he pitches some tents on the Essaouira beach and set up his nautical base. The tents will become a wooden cabin and a few years later the restaurant is transformed into a real welcoming place thanks to his wife, Marie Deflandre. Since, Ocean Vagabond it is also two ecolodges in Dakhla. Ocean Vagabond Dakhla Lagoon for kite surf and Ocean Vagabond Dakhla Lassarga in the extreme south of Dakhla for surfing.

A desire mixed with kite, surf, windsurf, friendliness, sharing, sun and to connect with the natural elements, we definitely recommend Ocean Vagabond.