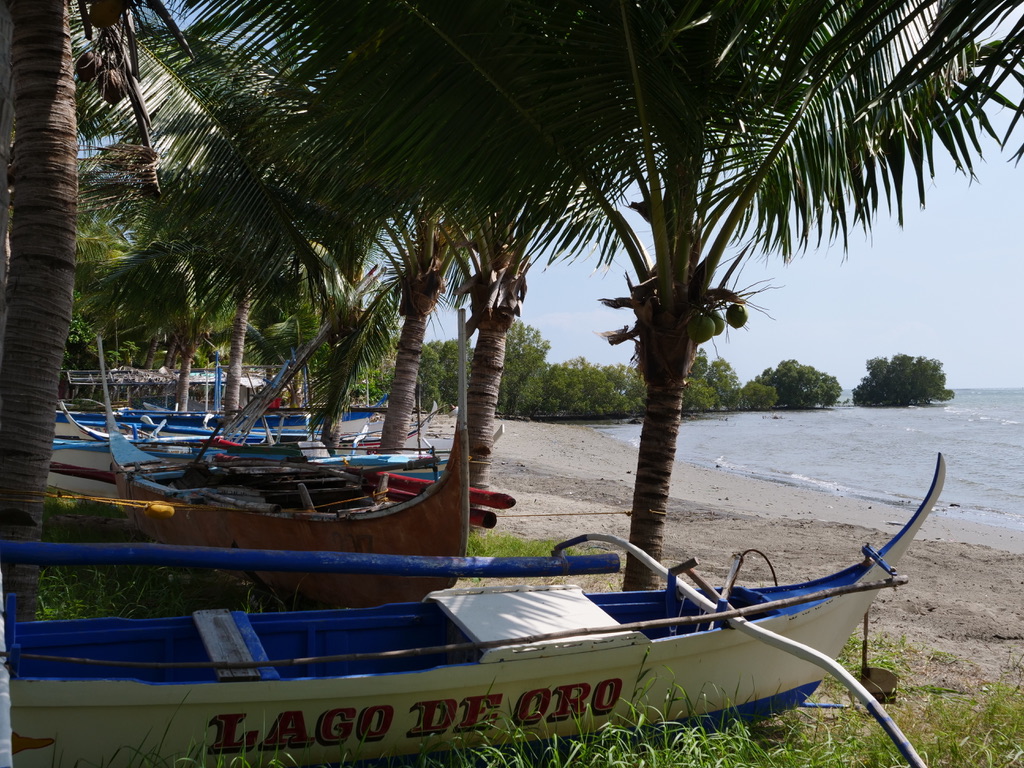 One of the best things of Manila which is quickly tangible, is that we want to leave as often as possible. 115 km south-west from Manila, two-and-half-hour drive – depending on the traffic – in the Calatagan peninsula, we find the Lago de Oro. One word perfectly describes this place: “friendliness”.

Lago de Oro is located along the western coast of Calatagan, which occupies an entire peninsula. It faces the Verde Island Passage, one of the busiest channels in the country. The road, after the exit of the Manila highway, leading to the Calatagan Peninsula crosses coffee and pineapple plantations before the Tagaytay Ridge that overlooks Taal Lake, and sugarcane fields near Nasugbu. After Tagaytay, the countryside is verdant with coconut plantations, mango orchards and coffee farms. As iconic as jeepneys, on the road the tricycles outnumber the combined total of cars, buses and trucks. The minimum capacity of a tricycle is four, but occupy up to as many as eight or more, excluding the driver!

Lago de Oro is a peaceful place, far from any construction, where you can see the mountains in the background. On arrival, we discover a shady garden of palms trees along a large cable wake park. This place, who hosts a hotel restaurant with pool, a direct access to the beach and a cable wake park, was redeemed by a Lebanese-Filipino two years ago. The owner is particularly welcoming, warmhearted and discrect. With his three sons, he has set up a simple and effective organization: the eldest son, Samir, is responsible for the managing of the hotel-restaurant while the two cadets, Jean and Andrew, take care of the cable wake park. True to their roots, the three brothers – each in his own place and in his own way – give the feeling of an authentic simplicity which, far from the large hotel complexes, easily leads you in a little levity.

The rooms are spread over three two-storey Mediterranean-style buildings. Two buildings host rooms for four people which are relatively modest but clean, safe and bright. The third building has eight family rooms with balconies which offer a view of the cable wake park. Normally, the family rooms provide accommodation up to ten people, but a record was established with eighteen people according to Samir!

After passing through the first meters of the beach – which are unfortunately often strewn with detritus and waste – the landscape is as wild as splendid. The mangroves border the sea. At low tide, the sea goes far enough, and we discover an extensive stretch of black sand on which a small walk leads to small crabs, hermit crabs, colored streaked worms, sea cucumbers, sea stars and seashells. It is also an opportunity to meet fishermen operating from colored pirogue. Fishermen who immediately transmit in the hearts of the people who cross them the generous smiles on their lips.

About the cable wake park, the Lago de Oro is said to be the first wake park in the Philippines. The circular cable is made up of five towers and the path includes a series of jumps and 5 ramps, 2 pipes and 2 kickers of different levels of difficulty. In order to learn the basics of the sport; mainly posture, edging and first feelings, the beginners can also find a two-tower system in a background of the cable wake park. The dock gives the impression of a happy group of wakeboard fanatics who meet regularly in a relaxed and festive atmosphere. They know how to quickly put new riders at a comfortable and confident state very easily. Our young rider was easily and quickly integrated, so much that at the end of her first weekend she was really glad to know that she was already a member of the Lago de Oro team.

A beach cleanup may help to bring this place closer with a heavenly land. The change of scenery is guaranteed, and the region is a genuine invitation to explore the countryside. Furthermore, do not hesitate to dare to go to the beaches at the tip of the Calatagan Peninsula, full of wildlife, color and beaches which spontaneously generate curiosity, calm and wellness for the passing travelers.