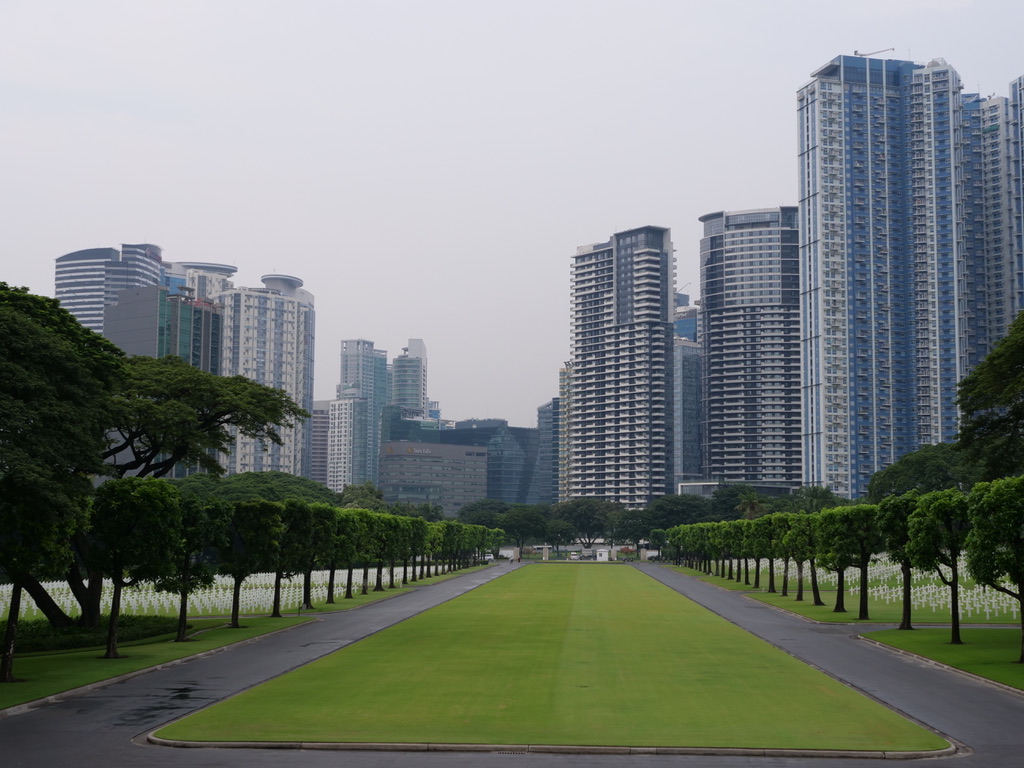 It may seem strange to begin to approach the history of Philippines by the visit of the Manila American cemetery, but there are obvious reasons for it: The American cemetery is just near home. It must be one of the biggest American Cemeteries I have visited. It seems bigger than the one in Normandy.

Upon 152 acres, eleven burial plots accounting 17,097 headstones are arranged in concentric rings around the memorial mall. Also because of the Navy activity in the war, the number of those with no known grave is endless – limestone walls within the two hemicycles list 36,285 names engraved on marble walls of the missing. The lush green of the turf between the rows of headstones and the colorful flowers on the early-blooming trees framed against the backdrop of Taguig City, Bonifacio and the rest of Metro Manila in the distance, offer an exclusive environment away from the exterior hustle and bustle.

One of the facts about World War II that almost never made it to our history books is that Manila became the second most devastated Allied capital in World War II. Manila was indeed known as a beautiful, elegant metropolis –dubbed the “Pearl of the Orient”-then world War II happened. From February 3, 1945 to March 3 of the same year, Filipino and American soldiers went head to head with Japanese invaders. Ultimately, the battle ended in a blood bath of massive proportions that left the city totally devastated. Some 100,000 to 150,000 Filipino civilians died amid the fighting, in a city of 1 million.

According the historian William Manchester, “The devastation of Manila was one of the great tragedies of World War II. Of Allied cities in those war years, only Warsaw suffered more. Seventy percent of the utilities, 75 percent of the factories, 80 percent of southern residential district and 100 percent of the business district were razed.”

During World War II, the Philippines suffered incredible pain, damage and suffering. In nutshell-for those who will take the time to read this post- the conflict in the Philippines can be resume by three main phases.

• Japan launched a surprise attack on the Philippines on December 8, 1941, just ten hours after the attack on Pearl Harbor. The defending Philippine and United States troops were under the command of the commander of the United States Armed Forces in the Asia-Pacific region, General Douglas MacArthur. Japanese bombers destroyed his planes on the ground and American and Philippine forces were soon overwhelmed.

The Philippines defense continued until the final surrender of United States-Philippine forces on the Bataan Peninsula in April 1942 and they were forced to find refuge on Corregidor – an island fortress in Manila Bay – in May. Manuel Luis Quezon (president of the Commonwealth of the Philippines from 1935 to 1944) and Sergio Osmeña (fourth President of the Philippines from 1944 to 1946) accompanied the troops to Corregidor and later had to leave for the United States, where they set up a government in exile. MacArthur was ordered to Australia.

• The second phase; the Japanese military authorities immediately began organizing a new government structure in the Philippines. Although the Japanese had promised independence for the islands after occupation, they initially organized a Council of State through which they directed civil affairs until October 1943, when they declared the Philippines an independent republic. Nevertheless, the Japanese-sponsored republic headed by President José P. Laurel proved to be unpopular.

Japanese occupation of the Philippines was opposed by increasingly effective underground activities and guerrilla activities, which ultimately reached a large-scale proportion. Postwar investigations showed that about 260,000 people were in the guerrilla organizations and that members of the anti-Japanese underground rebels were even more numerous. From June 1942, until October 1944, the only fighting that occurred in the Philippines was between Japanese occupying forces and guerrilla resistance fighters. During this second phase there were no large or decisive battles, but rather many ambushes and raids against Japanese outposts.

• During the third phase, General MacArthur’s Allied forces landed on the island of Leyte on October 1944, accompanied by Osmeña, who had succeeded to the commonwealth presidency after the death of Quezon on August 1944. From then, until the end of the war in August 1945, there would be more large-scale fighting as American and Filipino forces recaptured important cities such as Manila and drove the Japanese out of the Philippines. Fighting continued until Japan’s formal surrender on September 2, 1945.

The Philippines suffered great loss of life and tremendous physical destruction by the time the war was over. An estimated 1 million Filipinos had been killed. For those who want to know more read “Rampage: MacArthur, Yamashita, and the Battle of Manila,” by James M. Scott which is a powerful narrative history of one of the darkest chapters of the Pacific War. A selection of photos from the twenty-nine-day Battle of Manila and which had forever changed the Philippine capital is also available on James Scott’s website.

A few hours in the Manila American Cemetery is an opportunity not only permitting to correct any personal history weaknesses about the Asia-Pacific War World II but also to obtain a moment of silence and contemplation to the heart of an environment in a state of perpetual turmoil. The twenty-five mosaic maps show the massive scale of the Pacific theater in World War II and recall the achievements of the American armed forces in the Pacific, China, India and Burma. This sanctuary of mass death, where one speaks in a low voice without having to prescribe it, is undoubtedly places of living memory where it is worth stopping.