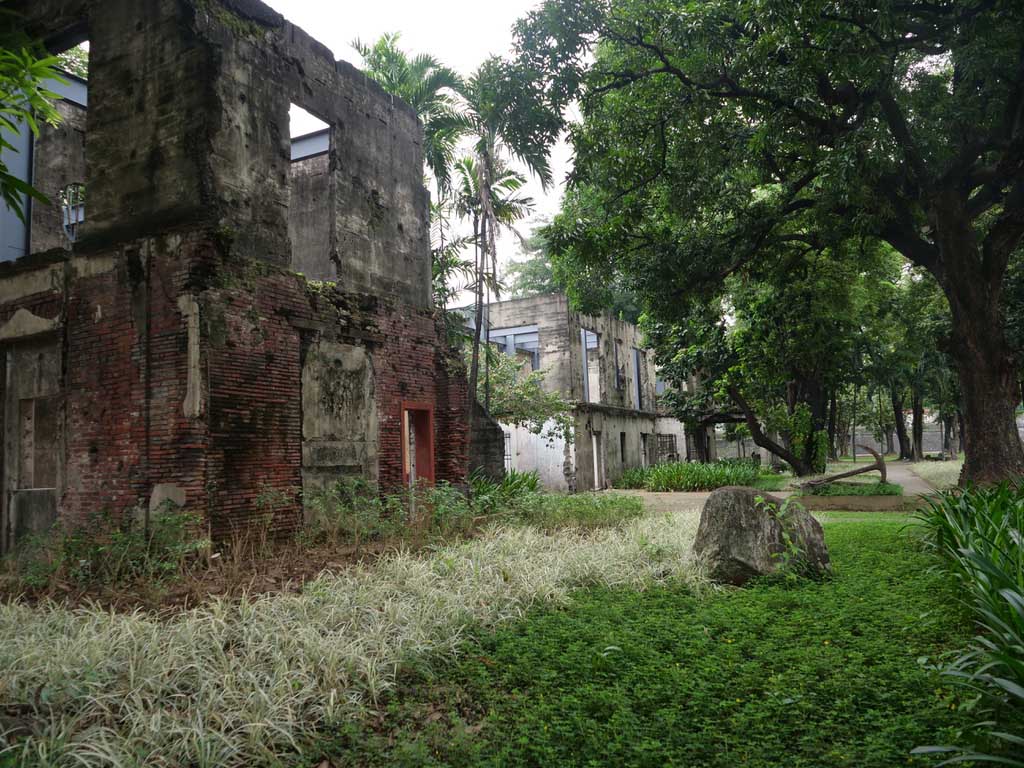 West of Metro Manila and 14 km or one hour’s travel from the apartment, we find a place called Intramuros. The Spanish began building Intramuros in 1521 on a land strategically chosen between Manila Bay and the Pasig River. As the “noble an ever Loyal” capital of the Spanish empire, this walled city had spread over 64 hectares, with walls stretching 4.5 kilometers in varying heights and seven gates with drawbridge.

As the locus of Spanish imperial power in Asia, Intramuros was the home of the most important offices of state, such as the Palace of Governor-General. The walled city hosted majestic homes, churches, convents and monasteries, schools, hospitals and several paved plazas. The indigenous peoples were settled on surrounding areas of the walled city and the Chinese were confined into slums called parian.

Intramuros has withstood many disasters–from wars to natural calamities–and has adapted under the hands of colonizers and invaders – Chinese pirates, Dutch army, British, American and Japanese vary from one period to the other. Intramuros was reduced to rubble during the Manila Battle at the end of World War II. Only the San Agustin Church remained standing, and it was declared a UNESCO World Heritage Site under the Baroque Churches of the Philippines. Other landmarks and establishments have since been restored.

Into Intramuros, the historical dimension is really clear, and we are quickly immersed in this country’s complex past. It is difficult to be in Manila without visiting the Walled City of Intramuros. The atmosphere is different than in the other parts of Metro Manila we currently know, the streets seem to transmit a solidity and complexity marked by time. In Intramuros, all seem to be a little out of time and suddenly we are surprised by the desire to roam throughout the country’s history.

It was also the opportunity to meet one of the most venerated character in the Philippines, everywhere in Philippines the name of Rizal appears. Indeed, Fort Santiago, which today is a National Historical Landmark, houses the Rizal Shrine and a museum to celebrate the life of the national hero.

He was a doctor, a writer, and an intellectual declaring that the Filipino people were capable of self-government and didn’t need to be ruled by Spain or any other foreign power. Moreover, he knew how to paint, sketch, and make sculptures. He lived in Europe for about 10 years and he became a polyglot – conversant not less of 22 languages. All this in addition, Rizal had varying degrees of expertise in architecture, sociology, anthropology, fencing, martial arts, and economics.

Rizal was an influential individual on Filipino independence, education, as well as a bolster to Filipino self-image and mindset. But also, a character not really appreciated by the Spanish government who has demonstrated that it shared absolutely not the Rizal thesis. Indeed, José Rizal was considered as a danger for the colonial order, sentenced for treason, he was shot on December 30, 1896 at Bagumbayan in Manila.

Every year, December 30 is a Philippine national holiday commemorating the life and works of Jose Rizal, a national hero of the Philippines.

But according to National commission for Culture and the Arts (NCCA), Jose Rizal is an unofficial National symbol. Former President Fidel Ramos issued an executive order to create a National Heroes Committee, which is mandated to study, evaluate and recommend Filipino heroes in recognition of their exceptional character and remarkable achievements for the country. The committee recommended nine Filipino historical figures to be national heroes: Jose Rizal, Andres Bonifacio, Emilio Aguinaldo, Apolinario Mabini, Marcelo del Pilar, Sultan Dipatuan Kudarat, Juan Luna, Melchor Aquino and Gabriela Silang. However, no action has been taken on these recommendations since the submission of the report by the committee in 1995.

So, in Philippines the official national symbols are:

• National flag – The National Historical Commission of the Philippines defines that the Philippines national flag is made of silk, had a white equilateral triangle at the left containing a sunburst of eight rays at the center, a five-pointed star at each angle of the triangle, an upper stripe of blue and a lower stripe of red. The sun stands for liberty; the sunburst of eight rays for the first eight provinces to take up arms against Spain; and the three stars for the three island groups of the Philippines – Luzon, Visayas and Mindanao. The white triangle signifies Filipino hope for equality; the upper blue stripe stands for peace, truth and justice; while the lower red stripe stands for patriotism and valor.
• National Anthem – Lupang Hinirang composed by Julian Felipe adopted from the Spanish poem, Filipinas, which was written by José Palma. “Lupang Hinirang” was first played publicly on June 12, 1898 during the proclamation of Philippine Independence.
• National Tree – Narra or rosewood
• National Flower – Sampaguita which is generally known as the Arabian Jasmine. Its white color symbolizes purity, simplicity, humility and strength.
• National Bird – Philippine Eagle
• National Gem – Philippine Pearl. World’s largest pearl was discovered by a Filipino diver in a giant Tridacna (mollusk) under the Palawan Sea in 1934.
• National Sports – Arnis, also known as Kali or Iskrima. Arnis is both a martial arts and sports. It is likened to Japan’s Karate and Korea’s Taekwondo.