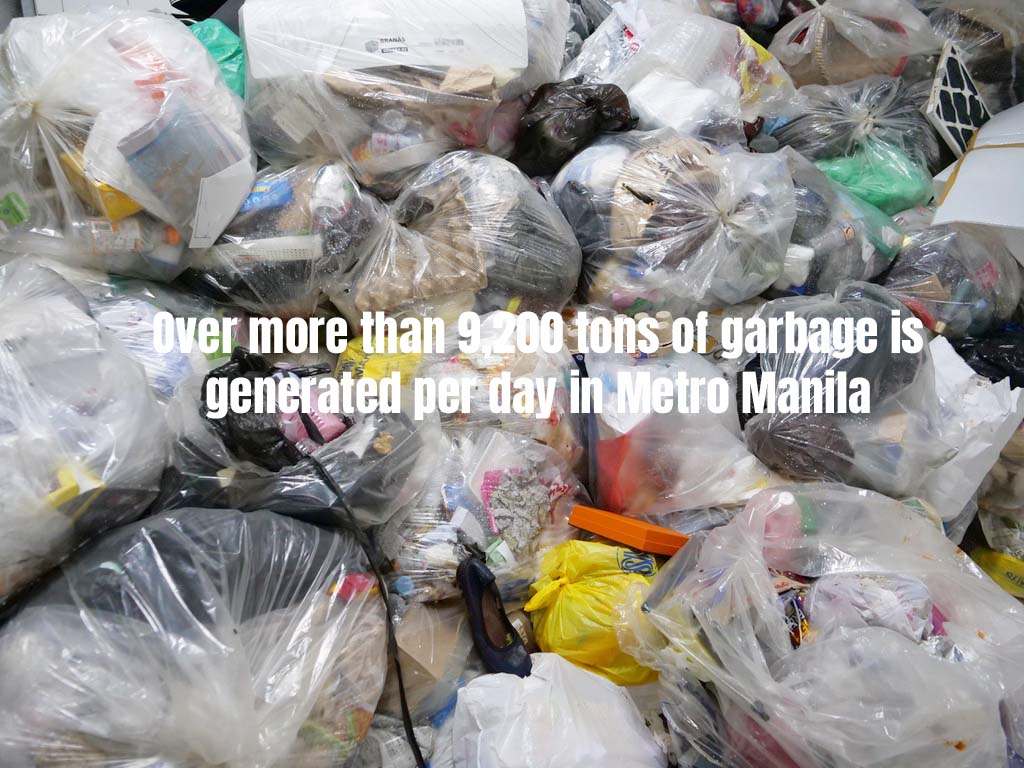 According to a report by the Senate Economic Planning Office (SEPO), the Philippines generated more than 40,087 tons solid wastes per day in 2016, including Metropolitan Manila accounting for more than 23% of the total wastes.

The last data of the Department of Environment and Natural Resources shows an average total of 9,283,889 kilograms of waste from the cities in Metro Manila produced per day in 2018. This puts Metro Manila among the top five most severe waste-ridden cities of the world.

And this is not the end because, the Philippines’ waste generation continues to rise with the increase in population, improvement of living standards, rapid economic growth, and industrialization. So, solid waste management has been a growing problem in the Philippines. The Philippines generates 2.7 million tons of plastic waste annually.

In this report we also learn that almost 75% of the household wastes are the primary source of solid wastes in Metro Manila. It is true that, when we settle in Metro Manila, and for us in one of the best parts of the metropolitan, the level of waste segregation demand for each household can leave you standing out in the cold. The waste segregation at the household level is not widely practiced and waste recycling seems minimal.

In the other hand, Philippines survey, produced by the NGO GAIA, shows staggering and shocking numbers about plastic waste. Every day, almost 57 million shopping bags are used throughout the Philippines, adding up to more than 17 billion a year. And that figure does not include the smaller and often transparent plastic bags —around 16.5 billion of those are used per year across the country, according to the report.

Several environmental laws address the issue. For example, the law mandate that non-organic waste like metals and plastics be segregated and channeled to recyclers. In reality, the bulk of metals and plastics are directed to junk shops who try to repurpose them. Those unsold are simply dumped in open trash pits and in the waterways. Organic waste, on the other hand, must be buried in landfills. There are three landfills that currently absorb Metro Manila’s waste: the 40-hectare landfill in Navotas, the 19-hectare landfill in San Mateo, and the recently expanded 70+-hectare landfill in Rodriguez, Rizal.

But only 85 percent of the total garbage volume from Metro Manila is being collected to be disposed at sanitary landfills. The 15 percent uncollected waste, or approximatively 1,392,583 tons of waste, ends up mostly in rivers, creeks around Metro Manila or Manila bays. Open dumping remains still the general practice of waste disposal as controlled landfills are very limited.

Masses of plastic trash swirling in waterways, garbage clogging drainage canals and huge stinking dump sites are among the most visible manifestations of the waste crisis in the Philippines.

It is sure that inside BGC, we are as a world apart, where everything is clean. Here, it could be easy to have the feeling not to be concerned by the waste management issue. But the fact is that we recognize we cannot govern ourselves in little compartments, that ecosystems mean everything is connected with everything else and each of us connected with the ecosystems. Without this interconnection, this interdependence of all the elements that form the ecosystems and life, nothing is possible. For sure, the little Teodul community have absolutly not the ambition to plant trees in a desert or use water if the stream has dried up. We just believe everything happens for a reason and we are here not only to visit and enjoy this country which is welcoming us, but also because we can make a useful contribution to the process.

Because we want to try build, step by step and at our own scale, an environmental project, it is important for us to go out and get some field experience. So, the first step is to approach actors, associations, companies and actions engaged in addressing waste and toxic pollution, climate change, and other issues.

At worse, it is better to have tried and failed than to have never tried at all! We are going to learn more about the world around us.
Dare your path!