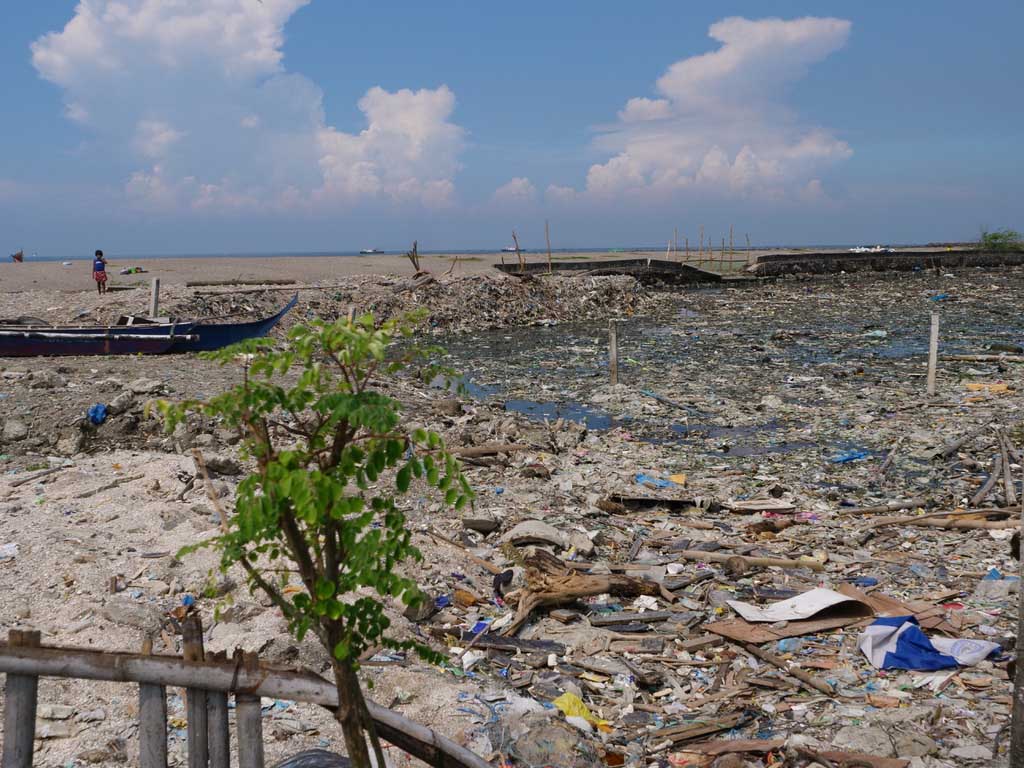 After my PARM visit, I suddenly wanted to visit one of his big partners’ companies. I went to visit Unilever or more exactly a senior sustainable business manager from Unilever Philippines communication department.

Present in the country since 1927, today the company is a leading manufacturer of home and personal care products, foods, and ice cream. Recognized annually amongst the Top 20 Taxpayers in the country, Unilever Philippines says to employ over 1,000 people directly, as well as provides jobs for 10,000 indirectly. Unilever is known to be one of the few companies in the industry that has succeeded in keeping majority of its manufacturing base in the Philippines.

If the nutritional benefits of the Knorr soup – best-selling food product of Unilever in the Philippines – are difficult to immediately evaluate, the Unilever impact in term of plastic waste is easily visible. The result released on November, 23rd of the second audit of “top plastic polluters”- conduct by the environmental network Break Free from Plastic and from its regular cleanups of beaches and other places – has ranked Unilever as the fifth largest polluter.

So, Unilever having announced ambitious commitments for a waste-free world, I was very curious about my meeting with them. According to the Unilever commitments, hundred percent of its plastic packaging will be reusable, recyclable, or compostable by 2025. The challenge is huge for a firm who uses over more than 700,000 metric tons of plastic in its packaging every year.

To set the tone and serve as a basis for discussion, I have been welcomed on the atmosphere modern and dynamic of the company cafeteria. Just under the TV screens with mainstream films of Unilever sustainable development activities, my host invited me to sit in order to discuss solid waste management.

The meeting began positively with the description of the Unilever commitments. Unilever would be on track to achieve its existing commitments to ensure by 2025, Unilever will reduce its use of virgin plastic in its packaging by 50% and help collect and process more plastic packaging than what it sells. Unilever’s target of reducing non-recycled plastic products follows similar moves by fellow multinationals including Nestlé and Coca-Cola. In 2018, Nestlé committed to making “100 per cent of its packaging recyclable or reusable by 2025, with a particular focus on avoiding plastic waste”.

It is a good thing that Unilever has made such commitments and I was terribly interested by the “how”. And it is on the “how” that the meeting became more complicated.

As an answer to the “how”, my contact begun to explain that in March a shampoo and conditioner refilling station was launched, in three high-traffic malls in Metro Manila, Philippines. A pilot that is currently not possible to extend for legal reason because this needs a specific manufacturing license that apparently miss to the company. After greeting Unilever’s initiative, I have pointed out the fact that the consumers in the lower income bracket who mostly use single-use plastic sachets of Dove, Sunsilk, or Lux will not use these refilling stations. What about the common Filipino who do not come to the malls of the city’ richest districts? Which alternative will be introduced in retail stores called “sari-sari” or in the markets?

Concerning the sustainable actions towards the common Filipinos, my host explained to me a Unilever circular economy which left me speechless. Unilever acts to collect flexible plastics: for one kilogram of flexible plastics, the common Filipino can win PHP10 equivalent in Unilever brand products sachets. The collection touches on all brands and the reward is only for the Unilever brand. I confess that it became unduly complicated to understand how Unilever is going to reach its overall commitments.

After my questions, my interlocutor stopped his presentation, and everything became even more nebulous. I did not get accurate answer or some figures about a few Unilever solutions putted in place which would be simple, convenient, durable. Seeing my interlocutor looking at his watch, I oriented the discussion on the Unilever solution called Cre@Solv Process Technology that is being pilot tested by Unilever Indonesia. But on this topic also, I did not meet more success, no precision about this process during which the plastic should be recovered from the sachet, and then used to create new sachets for Unilever products – creating a full circular economy approach.

Clearly, my host was not the good person to talk to about the Unilever concrete actions in term of solid waste management. On this topic, the Unilever’s institutional films bring much more information, but same they do not answer to the “how”.

This is all much sadder as not very long ago the common Filipino could buy a small quantity of the product wanted without to have to buy some single-use plastic sachets. The refill system worked really well during years, at least until a handful of multinationals such Nestle, Procter & Gamble and Unilever propose their products with single-use plastic sachets. The audit of “top plastic polluters” underline that just 9% of all plastics produced since the 1950s have been recycled.

Currently, I still do not know how Unilever expects to meet its commitments in the Philippines. But It goes without saying, this absolutely does not mean that Unilever will not reach them!