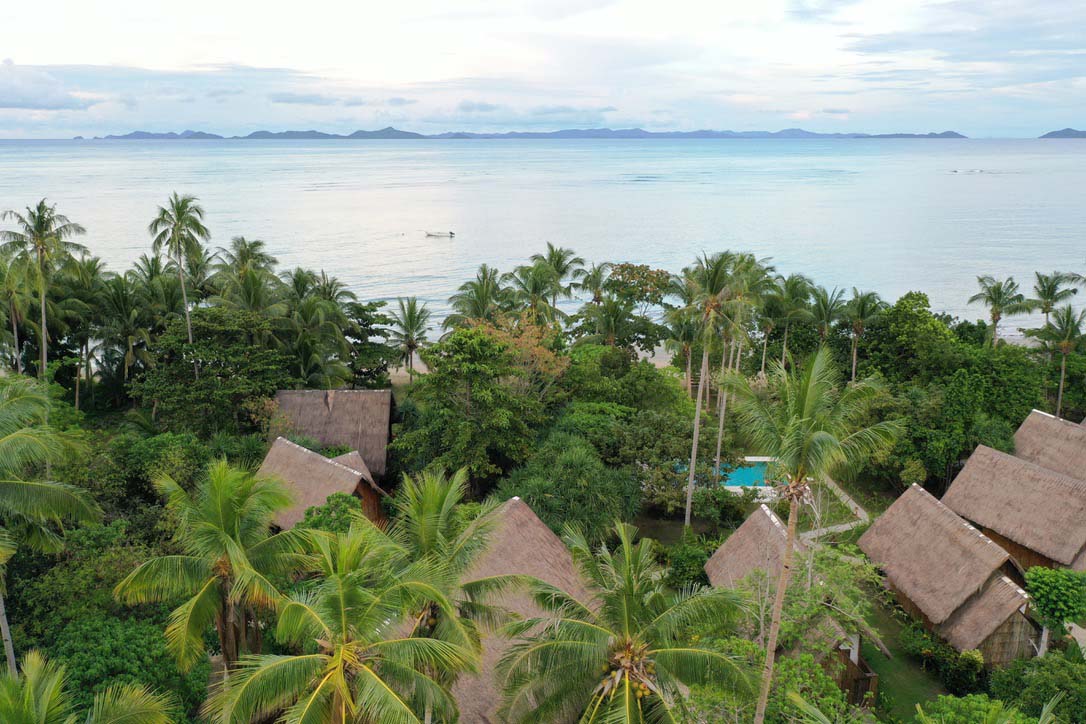 For our first week of holiday in the Philippines, we went diving on a drastically different universe than Metro Manila. The Qi Palawan resort offered to see the Philippines through a window of color and relaxation.

At Qi Palawan, we quickly dived in serenity. About 30km from El Nido on the northern tip of Palawan Island, the hotel offers eight rooms situated between a pristine beach and virgin forest. Each bamboo cottage is designed for environmental sustainability while providing the comforts expected with outdoor patios and a private outdoor shower. The pool is centrally located and even though it’s a bit small, it doesn’t hurt too much since there are not too many guests there. The private beach is wide and very quiet – fantastic for relaxing all day on your own.

At Qi Palawan, we dived in an eco-friendly resort. Located at the unexploited part of northeastern Palawan, Qi Palawan has been created in 2012 by Ms. Bettina Rodarte and Mr. Ismael Delgado that cared to preserve the environment and the natural resources by seeking help of the Zero Carbon Resorts (ZCR) project. Solar installations were completed on September 2017 and they are almost sufficient to provide the resort’s overall energy consumption even during peak occupancy periods. Qi Palawan is then becoming the first full-service, air-conditioned resort in the Philippines to use only solar power for 24 hours a day, 7 days a week. Furthermore, Qi Palawan has putted in place a set of simple but impactful measures that contribute to their sustainability efforts. For example, in the resort, we use shampoo and soap dispensers, the resort do not serve food and drinks using any form of plastic, such as bottles, straws, and bags -bamboo straws are locally made by Qi Palawan’s immediate community- and coolers and have implemented a 100% ban on single-use packaging. They also use natural, biodegradable cleaning supplies and detergent. All kitchen wastes go through an anaerobic compost to become soil for the resort’s organic garden. A rainwater catchment system is deployed, and the harvested water is used for the garden, helping save clean water. Recycling of water from air conditioning also contributes to this effort. Moreover, Qi Palawan implements the “buy local” idea. The use of amenities and goods that are made in the Philippines, specifically by the locals within the area, are prioritized. The little story says that the resort uses furniture made by local carpenters and employs locals and trains them as managers, cooks, kite instructors, and dive masters. They cook vegetables homegrown by the immediate neighborhood. The founders left at the beginning of the year for new adventures and the transition management continues to live the sustainable spirit of places until new owners arrive.

At Qi Palawan, we had dives at Imorigue Bay and Shark Fin Bay with turtles and sharks. The PADI diving center is really serious and professional, equipment is in very good condition, local instructor and boat staff are friendly and always smiling. Everything is done to be as comfortable as possible in diving. Different diving places are quickly reached and the boat pilot is particularly talented to avoid that the boat crossings is not too agitated with the big waves on windy days.

At Qi Palawan, we dived in wonderful places and some days we used the speedboat in order to do snorkeling and BBQ on different islands. We often had the beach 100% to ourselves. In this colorful world, dominated by the turquoise blue of the sea, it was absolutely impossible to not be admiring and be really seduced by the present moment.

At Qi Palawan, we also dived in one afternoon of kitesurfing, the wind conditions did not allow more. But between December and march, it is also possible to practice kitesurf in Qi Palawan.

At Qi Palawan, we dived on a wonderful week!